Blacks already feeling the pinch from a housing shortage in the New Orleans area after Hurricane Katrina are facing racial discrimination in their search for rental property, a survey by housing advocates found.

In one example, an agent told the black tester who responded to an apartment ad on Jan. 22 that only one unit was available, and not until February. The same agent told the white tester later that day that two units would available Feb. 1 and mentioned two other units.
Tammy Esponge, association executive for the Apartment Association of Greater New Orleans, she has no reason to believe housing discrimination is more acute in New Orleans than in other parts of the country.

"There's discrimination all the time out there — not just in the apartment market. I'm talking all over the place," she said. "But we are highly in support of our members enforcing the fair housing laws."

"At a time when people need housing desperately, we really can't stand to have discrimination occurring," Perry said.
Posted by eplewis2 at 7:56 AM 6 comments:

"This intimate, heart-rending portrait of New Orleans in the wake of the destruction tells the heartbreaking personal stories of those who endured this harrowing ordeal and survived to tell the tale of misery, despair and triumph."

This Spike Lee documentary will be playing as part of the Social Justice Film Festival at the College of Law on Thursday, April 19. Let's have a big showing of Student Hurricane Network participant at the viewing/discussion to show our support for the people of NOLA. A post-discussion led will be led by Professor Victoria Hadfield. 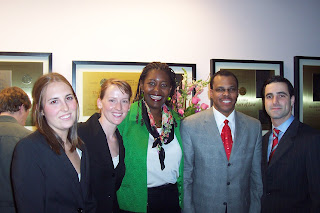 I think the rest of the College of Law discovered on Friday why the Student Hurricane Network students are unofficial Tracie Washington (TW) groupies. Tracie has such a commanding presence. Maybe its because she is a kick-ass corporate attorney turned civil rights lawyer. Maybe because she can rock out a bright green jacket. Is it her uncanny sense of humor?

I think part of what makes TW so appealing is the fact that she is so darn humble. She doesn't realize she has budding law student fans across the country. She doesn't realize (or at least doesn't acknowlege it) that she's a civil rights superstar. She readily admits she likes buying expensive shoes...but when called to duty...she has forgone those luxuries in favor of doing what she can to try to save her city.

Posted by Illinois Student Hurricane Network at 9:00 AM 15 comments:

Tracie Washington at COL on Friday!

Come to the New Orleans Judge Arthur Hunter - 75th Anniversary of Powell v. Alabama Conference, where Tracie will be one of the guest speakers. The conference is in the Auditorium from 1-4pm, but students are allowed to come later/leave early because of class. Hope to see you there!
Posted by Illinois Student Hurricane Network at 8:22 AM No comments: 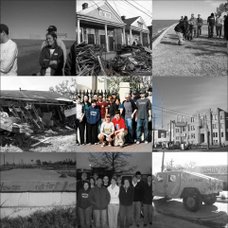